Kazakhstan is located in the centre of the Eurasian continent. Its territory is as large as 2 million 724,9 thousand square kilometers and accordingly it occupies the ninth place in the world by its size. In the North and West the republic has common borders with Russia, in the East with China, in the South with Kyrgyzstan, with Uzbekistan and with Turkmenistan.

The state language is Kazakh. The Russian language has the status of a language of interethnic communication. Monetary unit - tenge. Population is over 16 million people. The capital is the city of Astana.

The Republic of Kazakhstan is an industrial country with mining operations being one of the main sources of its economic growth. The country’s mineral raw material base consists of more than 5 000 deposits which expected value is estimated at tens of trillion US dollars. The country holds first place in the world with regard to explored reserves of zinc, tungsten and barite, second - silver, lead and chromites, third - copper and fluorite, fourth - molybdenum, sixth - gold.

Kazakhstan also has considerable reserves of oil and gas, which are concentrated in its western areas. Nowadays the country belongs to the group of the world’s leading oil-producing states with volumes amounting to more than 80 million tons of oil and gas condensate a year. According to plans the annual extraction will be increased to 120 million tons by 2020. At present Kazakhstan is in 9th place in the world with regard to confirmed reserves of oil. Besides that, the country is in 8th place by the reserves of coal and 2nd place by the reserves of uranium.

Over the years of independence Kazakhstan attracted 150 billion US dollars of foreign investments that makes up about 70 % of the total amount of all investments attracted to the Central Asia.

Kazakhstan is implementing a large scale project “New Silk Way” which aims to revive the country’s historical role as a connecting link in the continent and transform it into a largest business and transit hub of the region, a bridge between Europe and Asia. As a result of implementation of this mega-project by 2020 the volume of cargo traffic passing through the country should increase by nearly 2 times and subsequently make up at least 50 million tons a year.

The stable growth of all branches of the economy, the international recognition, the political stability serve as a basis for prosperity of the Kazakhstani society. Kazakhstan is a country that aspires to the future, honors its cultural traditions and successfully realizes the huge creative potential in the modern highly-competitive world.

Borovoye  - The Pearl of Kazakhstan

Borovoye resort zone is in the north of Kazakhstan, 250 km from Astana and is located at an altitude of 480 m above sea level in pine forest. Its area is ten square kilometers. Visiting card is a blue bay on a same name lake. Thanks to unique beauty of landscape, in combination with magnificent forests and therapeutic lakes, with air saturated with pine needles, Borovoye resort zone has a poetic name – «The Pearl of Kazakhstan». 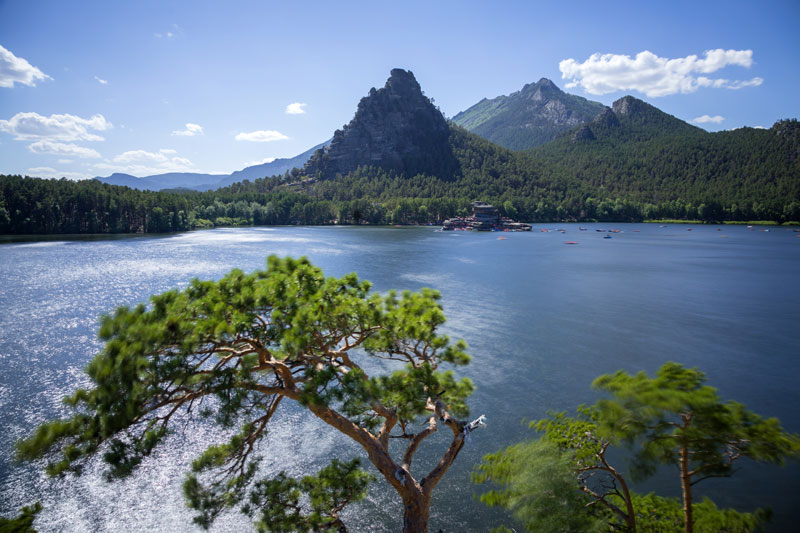 Kaindy lake is located among softwood forest in 130 kilometers from Almaty. The lake is only 400 meters long. The main sight of the lake is – firs, rising directly from the water. The water in the lake changes color regularly and is often very beautiful blue. This strange coloration is caused by lime and other minerals which appeared in the water hundred years ago. If you come closer to the lake, you can see that the water becomes crystal clear. This place is popular both for divers and for ordinary tourists. 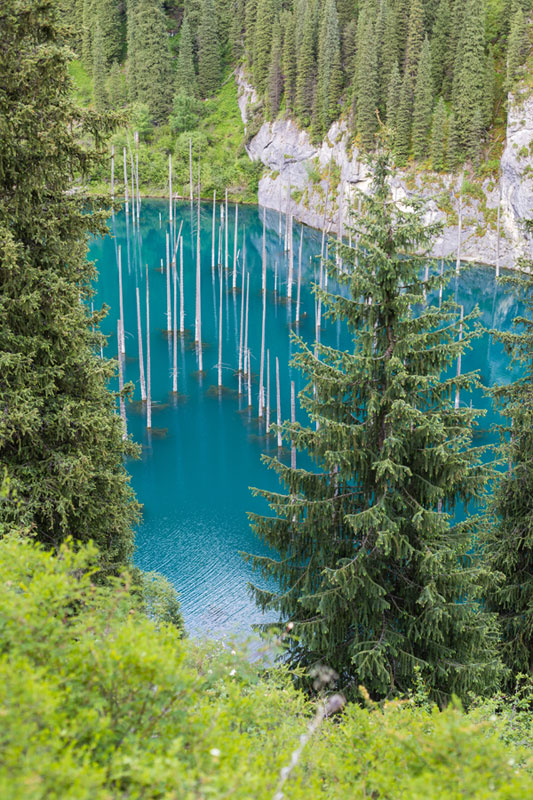 Kolsai lakes are a system of three lakes in northern Tien Shan, in Kolsai gorge, in a bridge connecting Kungei-Alatau and Zailiiskiy Alatau ranges. The lakes are surrounded by the highest Tien-Shan firs, and the water in the lake is absolutely clear and reflects the sky, and for this reason it seems bluish-blue. Beauty of the lake, crystal clear air, rich vegetation is breathtaking. This lake is the most accessible for tourists, and any person, if desired, can see it. 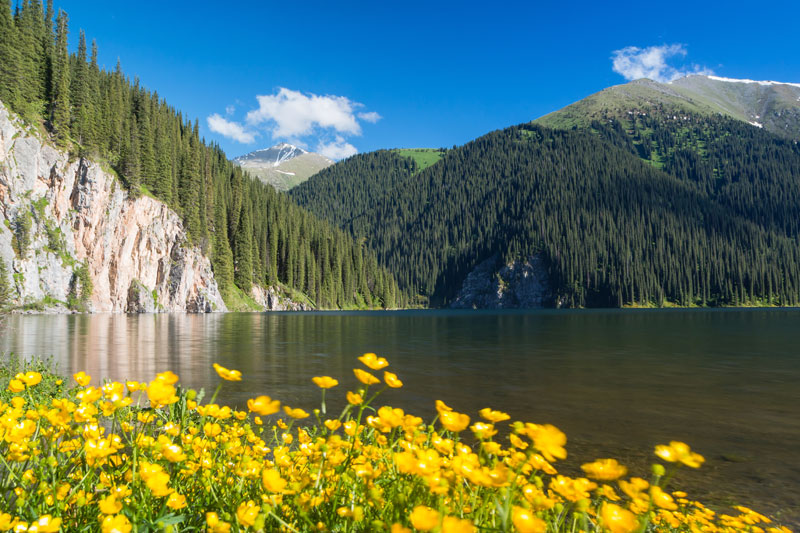 Charyn canyon is a wide canyon 3 km long, which is located 200 kilometers from Almaty. The most picturesque and visited part of the canyon is Valley of Castles - one of the most exotic creations of nature. This is explained by the fact that the canyon has a fairly soft structure of the walls - these are stones that are strongly pressed with clay, but easily change shape under the influence of wind and water. Fantastic giant and quite small fascinating sculptures are made of this material. 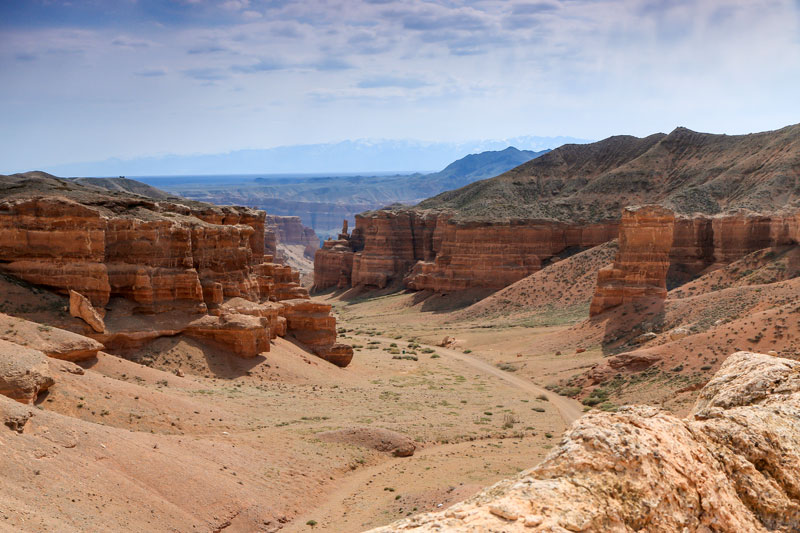 Astana on the eve of the World Mining Congress

Bayterek Monument was opened in 2002, and became a sign of history of Kazakhstan, a new stage in the life of people. At a depth of four and a half meters is the lower level, where there are cafes, aquariums and a mini-gallery «Bayterek». The height of the building is 97 meters, metal structure of the tower weighs more than 1000 tons and is 500 piles-supported. At the top is a huge ball of glass with a diameter of 22 meters and weight of 300 tons. The total height is 105 meters. The architect is Norman Foster. 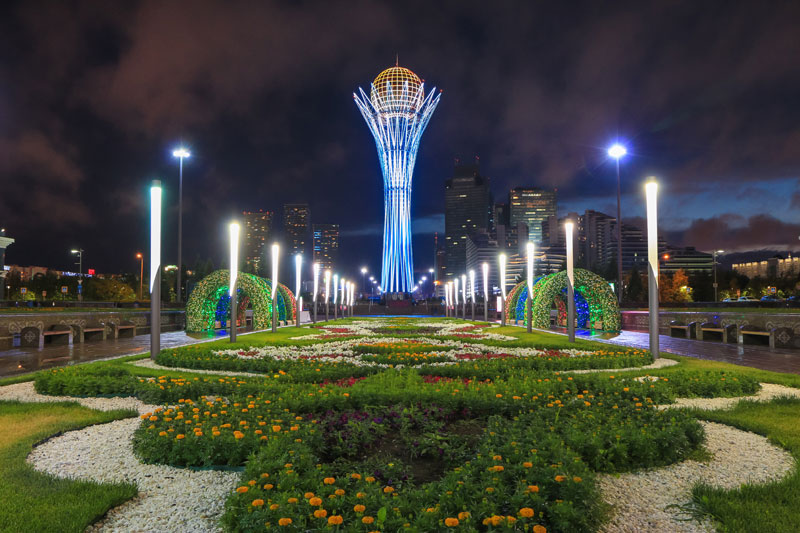 Ethno-memorial complex «Map of Kazakhstan – Atameken», created according to the project of famous architects and designers, was opened on September 8, 2001. Such a fascinating way to show the history of cities, countries and peoples is popular in many countries: Austria, Belgium, Great Britain, Germany, Switzerland and others. In total there are 17 such complexes in the world.

On an area of 1.7 hectares, which is about two football fields, there are cotton and rice fields of Kyzylkum, gray Burabai, ancient temples, the Pyramid of the World, rippling rivers of Alatau, coal of Karaganda and Caspian oil. Also, 14 regions of the country and 2 major cities of the country - Astana and Almaty are marked here. The nature and landscapes, architecture and transport networks of the country are reflected. The number of exhibits on the territory of the complex has already exceeded the number of 200 copies, and continues to grow.

Palace of Peace and Reconciliation

This structure was created by the world-famous architect Norman Foster. Its uniqueness lies in the principle of «Golden Fibonacci section», along which the pyramid was built. At the base is a square with a side of 62 meters, the height is also 62 meters. Here is the concert-opera hall for 1500 seats, opening of which was made by Montserrat Caballe. Also under arches of the pyramid there are conference rooms, exhibition areas, galleries, etc. At the very top of the Palace of Peace and Reconciliation is a «Cradle» hall, where the world-famous conference of leaders of world religions was held. Around the hall there is a «Winter Garden», delighting with a variety of vegetation from around the world. The pyramid is crowned by a large glass dome with image of 130 pigeons symbolizing the peoples of Kazakhstan. At night the dome glows and, like a beacon, it points the way to the symbol of unity of various religions, cultures, peoples. 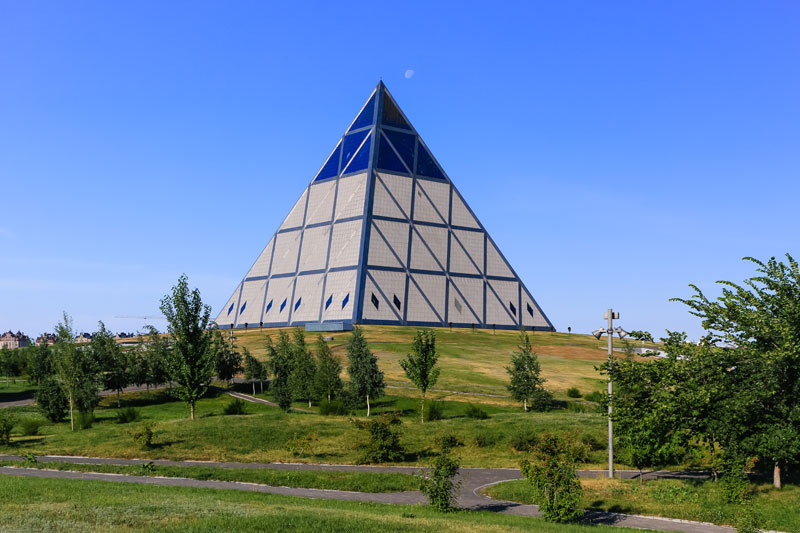 The photo and video materials by

Ministry of Investments and Development of the Republic of Kazakhstan